Michael Dolen’s works are studies in masks. When exploring the importance masks hold within the subculture of circuses, his work delves into folklore as much as personal experience. The various connotations of the word “circus” are felt everywhere in these pieces. The latent eroticism of circus performances are brought to the fore. Their elemental gestures are rendered in a static manner. I’m referring in particular to a moment at the top of one of his sculptural works—Circus Gala 2—where two orbs are locked together, surrounded by wires that suggest an atomic dance. Just below this, another design pattern, differing in coloration and tonality, also suggests dynamism in repose. What stands out across these two moments, and which continues throughout this body of Dolen’s work, is how different elements, media, and materials come into confluence.

For Dolen, the circus is less a source of entertainment, fecklessly consumed by the middle-classes, and more a window onto what remains the most authentic about modern society. The monetization of the body, and how it conflicts with the nomadic lifestyle of circus performers, also reveals the origins of a kind of schizophrenia in Dolen’s figures. Just as the site of circuses is a meeting place for different classes and forms of experience, there’s a decided conflict in the way the performers in the circus relate to the spectators. In effect, the participants in a circus (on the side of the worker, the performer selling his or her labor) are generally expected to conform to the interests of the paying observers. As evidenced in Dolen’s works, this situation could fracture the integrity of performance, introducing an added distance between the masked performers, and the communication they are trying to realize by way of performance. 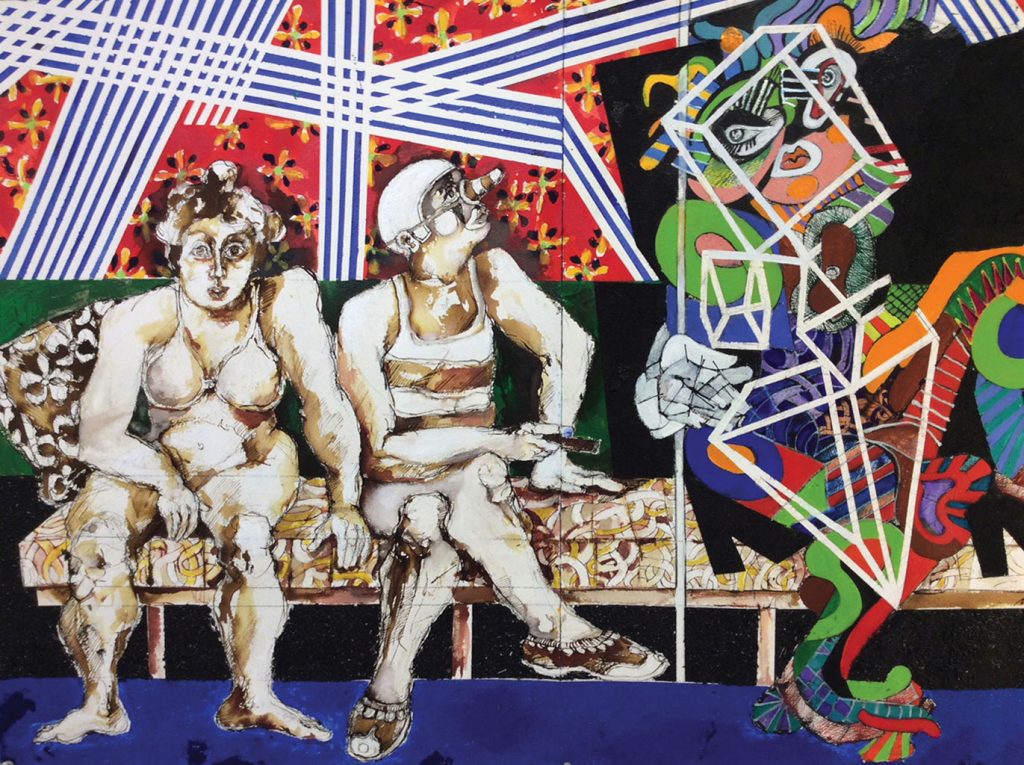 However, Dolen’s circus series is not merely about the failure of authentic communication. Quite the contrary, he positions viewers on the side of the performers, detailing a psychological nexus that might be all but unknown were one to examine the phenomenon of the circus with disinterested objectivity (with, say, the eye of a sociologist). Permitting his imagination to take flight, Dolen has created a fanciful world peopled by types rather than personalities. The types he frames—clowns, harlequins, dancers, and the like—take on a richly symbolic import. As though bodying forth archetypes of the collective unconscious, the clothing, postures, and crystallized movements of the figures informing his pantheon take on a dream-like universality. The scenes and figures he depicts possess such an expansive breadth because they’re designed in a way that allows the artist to incorporate different materials as well as art-historical techniques. 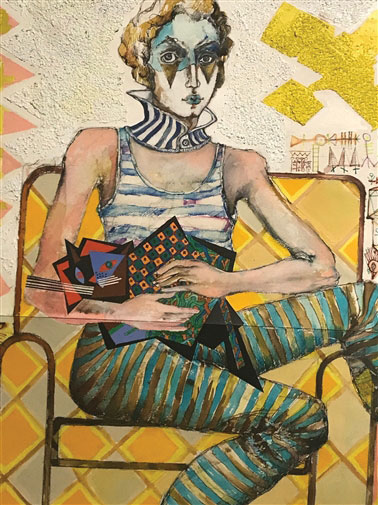 In the work titled, Circus Performer with Cat, an array of artistic styles come into play that emphasize the strangely ironic presence of the seated figure. Generally, irony is difficult to capture in visual terms: a sense of absence, of frustrated expectation, can usually only be rendered conceptually. In Dolen’s painting of the Circus Performer, however, an initial glimmer of irony is apparent in the rendering of the cat, which looks more toy-like and Cubist than the primary, seated figure. This cat, it would seem, comes from a different world. So many other elements in the picture come from different worlds as well, such as varying artistic traditions. The eye takes everything in immediately; but the intellect dissevers each part one by one.

The artist’s use of various materials, which allow the multiple sections of the work to reveal themselves. Concretizes the diversity inherent in the mythic idea of the circus: a kind of realm of pure play, of athletic adventure, and novel forms of intersectionality. The blending of Cubism with more a figurative mode comes into relief against an allusion to draftsmanship (tucked away behind the chair the circus performer is seated on), and masonry, evident in the wall that forms the picture’s backdrop. These mingled elements of art and design would be all but impossible to join, if not for the deliberate way in which the picture cuts itself in half. The picture sets itself up for allowances regarding what can be inserted into it, like a montage, and how different media will vie with each other, destabilizing the linear expectations of the eye.

What stands out as an essential part of Dolen’s artistry is the representation of the face. Typically, we think “face to face” encounters are somehow more real than communications that are mediated. The philosopher Levinas has gone so far as to say that the human face “orders and ordains” us, embodying an ethical imperative that says nothing less than “thou shalt not kill.” In Dolen’s work, however, faces are often masked, or torn asunder. On one level, this could be interpreted as a kind of Cubist distortion but Cubism is generally understood as making simultaneous what the eye typically takes in sequentially. Dolen, by contrast, is carefully tracing a a symbology of the face, lips and eyes; becoming metonyms, revealing the expressive personality generally found in someone’s face as a whole.

This leads back to what we discussed earlier. The tragedy of the carnival performer is not that he or she must wear a mask, but that his or her labor is effectively owned by the spectator. The labor of the acrobat, is a specific style of performance, which becomes property of the audience. There would seem to be little room in this dichotomous relationship for authentic self-possession, but this is where the deliberate strangeness of Dolen’s artistry could be said to palliate an otherwise dissatisfying situation.

In Circus Performer with Cat, the seated figure seems to look both towards and away from the viewer. His face partakes in the same ambiguity suggested by the cat he holds on his lap. In the double meaning of gazing toward and away from the viewer there is a duplicity that suggests two lives: one lived on the stage for an audience, and one lived in the interiority of consciousness. The inner world, the realm of conscience, is animating the outer world, the realm of performance and spectacle. This infuses Dolen’s figure with a sense of quiet mystery; hence, the air of intensity the work has, while also being somewhat humorous.

While Dolen might not shirk from depicting the tragic dimensions of the circus, he’s also mindful of its funny side. Yet even here, pleasure is exploded, fragmented. The only way it can endure is if somehow the performer can reclaim himself from the audience or spectator. The art of concealment, thus, becomes essential for authentic joy to emerge. In visual art, concealment is always openly displayed. In Dolen’s work, what’s “hidden” is simply that which withdraws from representational obviousness. In other words, it’s abstraction.

Within the context of his works dealing with circuses, Dolen’s use of abstraction signals a kind of return to cosmic origins. In the piece titled Circus Gala 1, it’s quite evident that abstraction, the draughtsman-like lineations inserted into the composition, anticipates in outline the figurative fullness of the harlequin, the chicken-faced clown, and the eye whose lashes seems to stream outward into a shadow landscape. What abstraction also accomplishes is the creation of a new environment for these figures. They’re steeped in a metaphysical circus of ethics and conscience, instead of the counterpart of a base level physical manner.

Dolen’s work seems to speak to the utility of masks, of concealment, as something that portends a more authentic reality. The image of the circus becomes a phenomenal surface. The imbricated social relationships that a circus connotates—the hierarchies it establishes, and the world it makes its appeal to—all of this collapses before the agency of the performers who give it life. In this way, the circus is still carnivalesque—it retains its value as a site toto genere different from the ordinary world of work and routine. As Dolen portrays it, the circus is something quite different from the image it gives off to the world. Underlying the kind of festivity circuses are designed for, there is a world of primeval forces swelling with unbridled dynamism, out of which the reality of the circus emerges into the light of day. 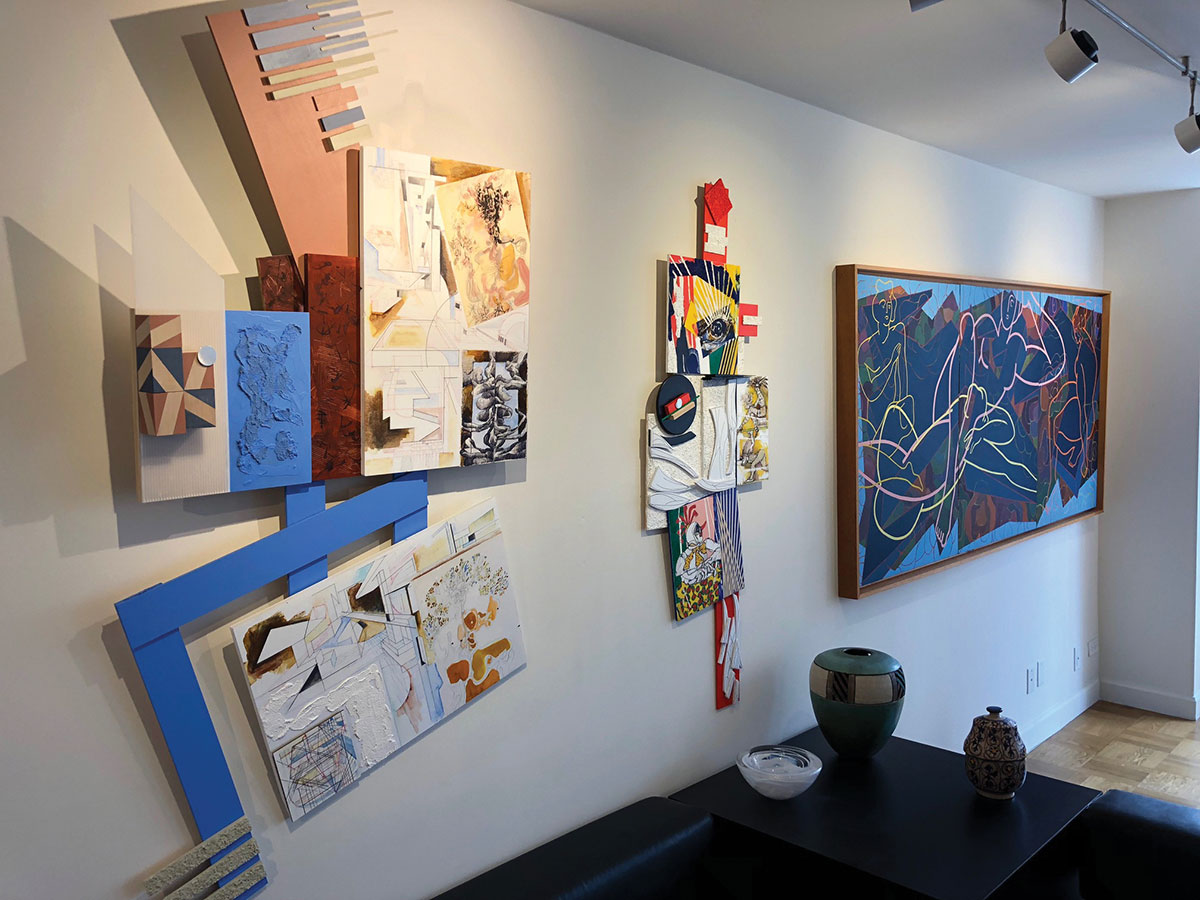 The fragmentation inherent in Dolen’s figures—the horizontal line that cuts in half the seated Circus Performer, the tessellated expression of a mosaic of dissevered faces—is less the effect of an objectifying gaze that reduces performance to the status of a commodity, and more an expression of how the theater of humanity might look from the perspective of eternity. 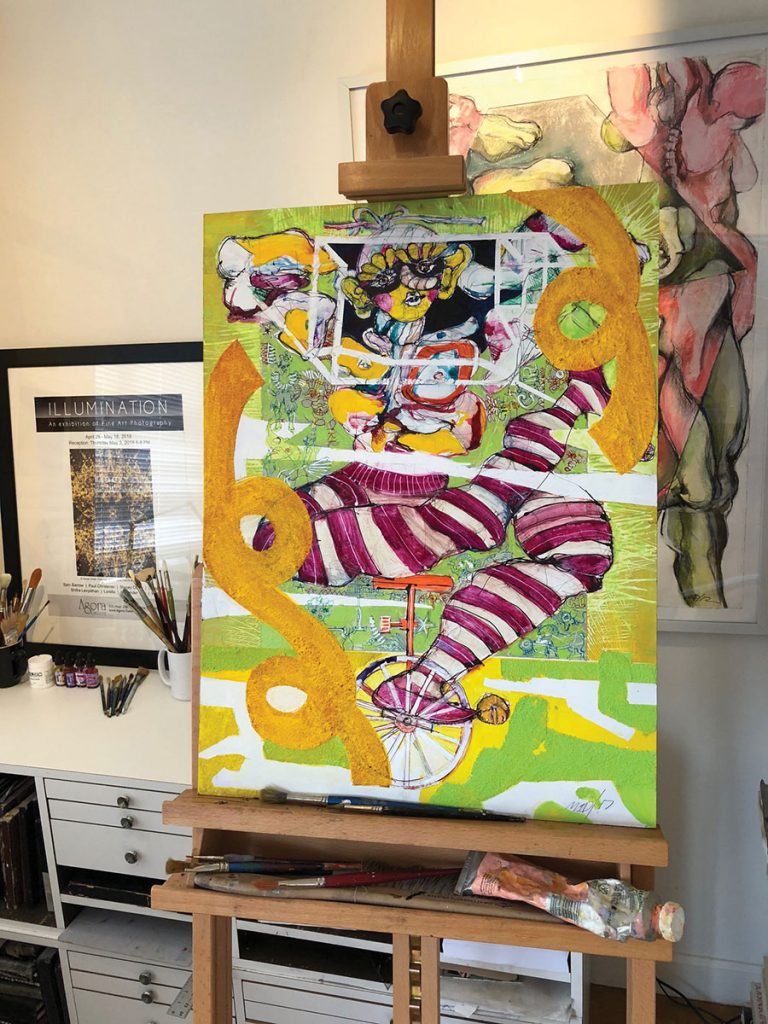 Similar to Cubism, Dolen abstracts from the sequential logic of time; yet he also makes the necessity for this kind of abstraction evident. Pursuing the theme of performativity and games, it’s not inaccurate to say that Dolen’s artistry is like that of a card player who delights in showing his winning hand. Representing what can only be imagined, the society of the circus provides all the tools necessary to express the inexpressible—to say what can be said only indirectly, through visual symbols rather than verbal signifiers. In this way, Dolen’s circus series is less the private musings of an artist reflecting on the circus, and more the living realization of a carnivalesque utopia. 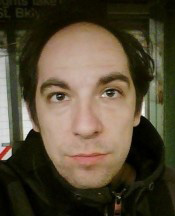 Jeffrey Grunthaner is a writer based in New York. You can find his work in BOMB, artnet News, The Clauduis App, Archinect, Imperial Matters, Folder, Hyperallergic, and elsewhere. His chapbook THE TTTROUBLE WWITH SUUNDAAYS was published by Louffa Press in 2014. He curates a reading series on contemporary poetics at Hauser & Wirth, West 22nd Street.